Tonight I took a short break from the computer and visited Matt who was just finishing the final dots on a lovely lidded jar.  Matt shared with me his recent color theory that has been put into action on a few recently fired mugs.  He put down his brush and explained this new color theory. 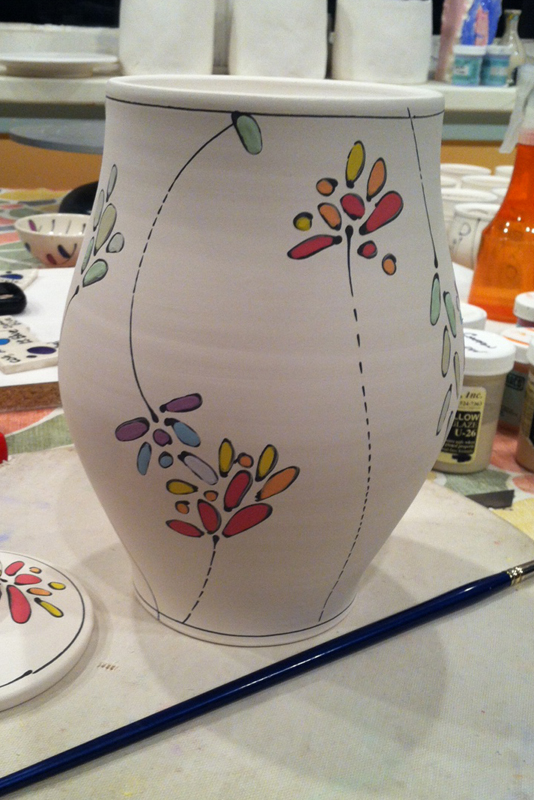 Now we are always throwing around crazy silly ideas.  I mean, that’s to be expected from a couple that names their business “Free” anything.  We do have fun.  Sometimes I’ll draw stuff like the lightning bolt image from Flash Gordon.  Or Matt, Bobby and I will agree to name a new form after a favorite recently deceased musician.  Like our “Dio” Tray.

Actually, music often is a key factor influencing us.  Matt is a big fan of large speakers to create very large sounds.  And while I prefer to go to the symphony or listen to something less hard, often some good old school Metallica hits the spot or a crazy Dubstep mix is just what I need. 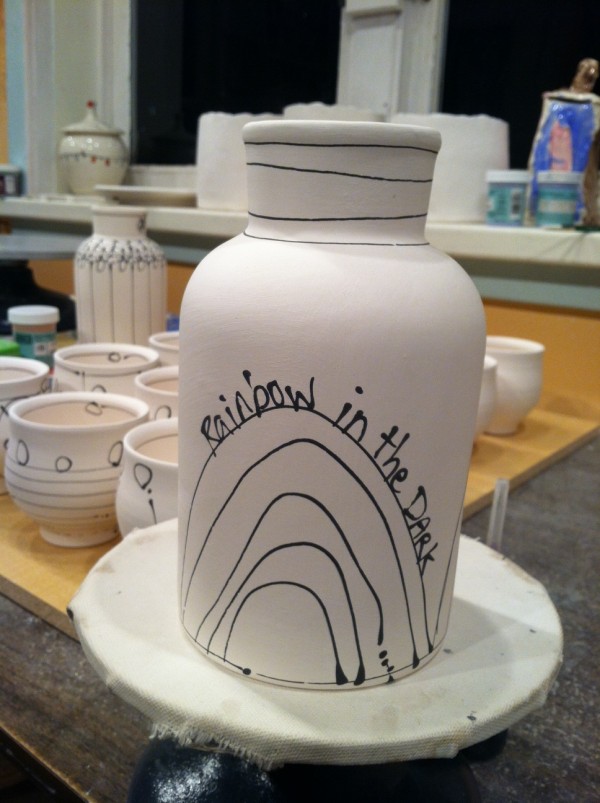 A long, long time ago, I decorated this small bottle with the words, “Rainbow in the dark.”  If you are not familiar with the musical talents of Dio, then you might not recognize these words.  But if you are, you know that this heavy metal band released this song in 1983.  I like the words not just because the song is pretty great, but because I feel like a rainbow in the dark is pretty incredible if you think about it.  And difficult to portray visually on a porcelain pot.

Tonight, Matt may have taken a step forward in finally painting this small bottle.  He has been taking a rainbow of six colors and using five on the surface you can see, then hiding the sixth color under the foot, or “in the dark”.  So the final color completing your rainbow is actually a “Rainbow in the Dark.”

How great to talk color theory and make up your own!  I pulled out a few of my color theory books and realized I couldn’t find a book I really enjoy called Chromophobia.  It is by David Batchelor and is bound together in hot pink.  Track it down and read it.  I’m going to.  And Matt and I will keep having fun painting dots, chasing rainbows and creating new color theories!